It’s been a whirlwind month for Olivia Vesely.

An elevation to St Kilda’s AFLW list and a maiden finals berth for the Southern Saints has resulted in a rollercoaster of emotions for the 19-year-old.

But the ride has continued in the best possible way, with Vesely’s super season in the red, white and black rewarded with the Debbie Lee Medal for the VFLW Rising Star.

The lively Saint’s impressive campaign also saw her named in the VFLW Team of the Year on the interchange bench.

SOUTHERN SAINTS STEAM INTO SEPTEMBER: Preliminary final on the horizon for the red, white and black

Vesely has averaged 18 disposals and four tackles from her 14 matches in 2019 to be one of the Southern Saints’ most reliable contributors.

The half-forward/midfielder starred against Collingwood in Round 1 (24 disposals), before showing her physicality and hunt with efforts against Hawthorn (19 disposals, eight tackles) and Darebin (22 disposals, six tackles).

A match-winning goal against Essendon was the cherry on top of her sensational season, with the Saints securing a top-two spot as a result. 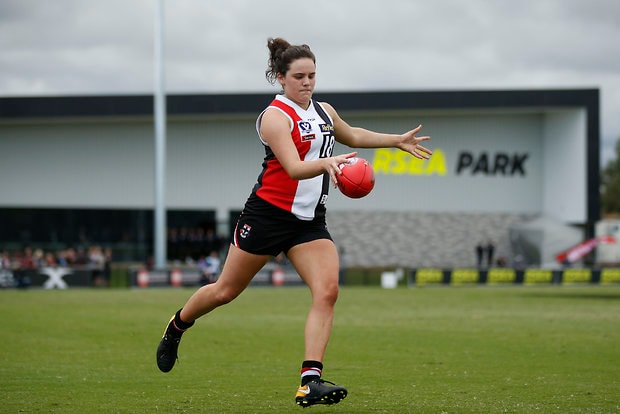 Olivia Vesely burst out of the blocks right from the get-go, piecing together a 24-disposal display in her maiden outing in the red, white and black.

Vesely has been just as pivotal through the midfield this finals series, piecing together an influential 10-possession performance against Melbourne Uni last weekend.

The Southern Saints will now turn their attention to Sunday’s preliminary final against Collingwood at Adcon Stadium.