Although by his own admission he was underdone, his influence was massive in gifting the Saints the win.

Steven finished his comeback game with three goals and 22 disposals; his last-gasp major in the term opening the door for St Kilda’s final assault.

The four-time Trevor Barker Award winner's first clean disposal along the wing was met with an almighty roar.

That only intensified after he bagged his first, before growing again with his final major in the game’s dying stages.

There’s no doubt he was rusty at times, but glimpses of speed and vivacity showed the 29-year-old still has a few tricks left in his wheelhouse.

Great to have you back, Stuv. 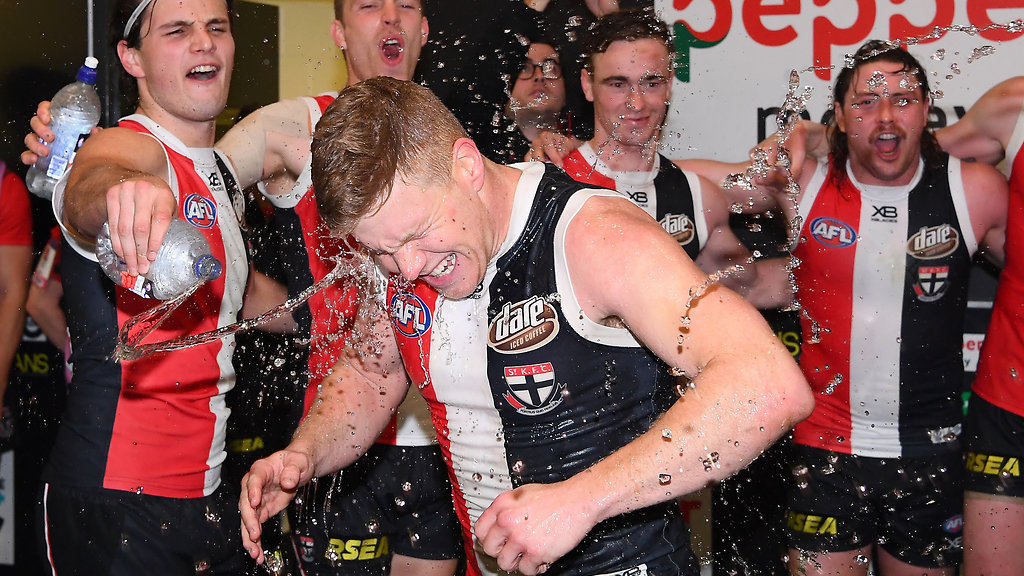 Dan Hannebery celebrates his first win in his new colours.

A hot start was just what the Saints ordered.

And Dan Hannebery facilitated that in just his third game for the Saints, putting through two classy majors in the opening quarter.

His first – a left foot banana through traffic – saw his new teammates surround him, while his second mere moments later was met with just as much reception.

First goal as a Saint for Dan Hannebery! #AFLSaintsFreo pic.twitter.com/rCqilwAqYO

After extensive and frustrating blocks of injury, the No. 10 marked his return with 23 disposals, six tackles, three clearances and two goals.

But to top it all off, his first win in the red, white and black.

With the game in the balance and Freo on the charge, Jake Carlisle and Josh Battle rose to the occasion.

There were some moments where it got hairy, but the No. 2 weathered the storm – and the heat – to pull away with the win.

Battle was equally huge in the game’s twilight stages with six disposals and two tackles.

But his biggest moment came in the last 10 seconds, with the 20-year-old charging back with the flight of the ball to ice the game with a heroic mark in defensive 50.

A game-winning moment at its best...

...but when it comes to match-winning moments, it was Josh Bruce who steered the Saints to victory.

After working hard all day for little reward, the key forward delivered when it mattered.

Bruce’s goal put the Saints up by three points with 40 seconds left on the clock, with the frantic final seconds culminating in triumph.

Nick Hind was equally composed with his kick to Bruce, hitting up his target to perfection rather than blazing away when the blood was boiling.

Cool heads persevered in the end, but when that final siren rang, the lid was certainly off.

The Saints hit the front with 40 seconds left on the clock.

Sunday’s stunning win capped off a day of celebrations for the club.

The return of two stars, another win on the board and a heart-stopping final quarter was the perfect salute to our fans.

It was certainly a final game at Marvel Stadium to remember, with the Saints on the road for the final two matches of the season.

Through thick and thin, the St Kilda faithful have remained just that, always cheering on the red, white and black throughout the course of the year.

To all you Sainters, thank you.