In their final home game of the season, the Saints will say thanks to their 43,000 members and push for a win over Fremantle on Sunday afternoon.

The Dockers are on the bounce after beating Geelong; here’s who will be on St Kilda’s radar ahead of the clash at Marvel Stadium. 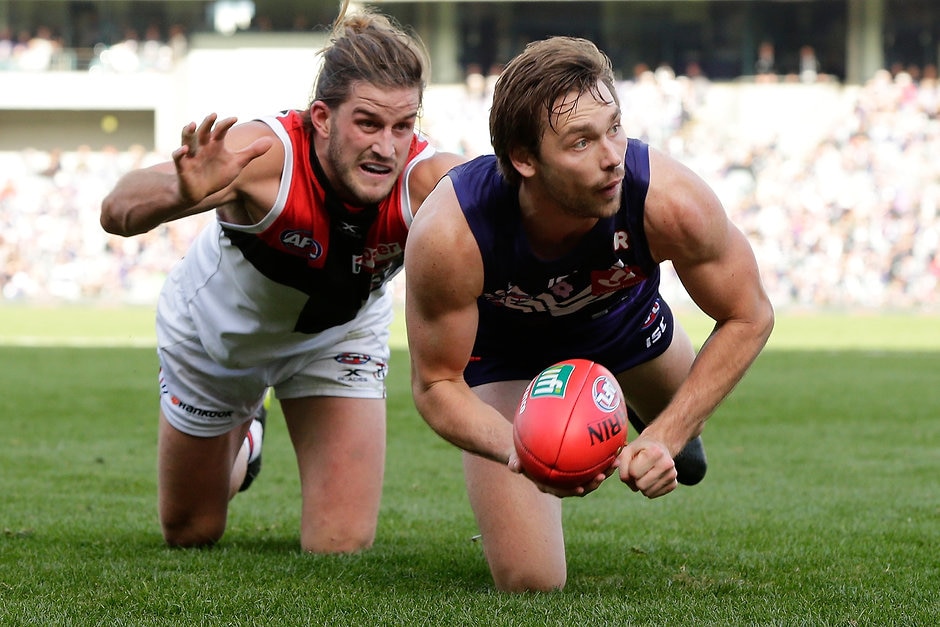 Fremantle’s backline has suffered in 2019, but Joel Hamling has remained a constant.

The sturdy defender has played every game this year and has held firm following injuries to Alex Pearce and Luke Ryan.

Hamling’s athleticism has seen him go toe-to-toe with a variety of forwards, with his spoils (158) thwarting opposition entries.

He’s second in the league for this statistic, but also leads Freo for one-percenters (165), intercept marks (45) and contested one-on-ones (76), for which he’s lost just 17.

‘Skunk’ has booted 38 goals – 10 from the past three weeks – while his marking has been equally proficient.

It will be tough for Membrey to break free, with Hamling averaging 92% game-time.

Nat Fyfe was concussed midway through the third quarter in Round 3 after racking up 23 disposals and six clearances.

And there’s no doubt the two will be itching to pick up their battle from where they left off.

Fyfe has enjoyed a superb 2019 campaign and is firming as a Brownlow favourite.

Last week’s 27 disposals (23 contested), 11 clearances and two goals has been a snapshot into his stellar season, with the skipper accumulating 10 games with over 30 disposals.

His contested dominance (299) and clearance supremacy (131) undoubtedly leaves him as the most vital asset to Fremantle.

Steele’s tackling prowess could curb the Docker, with the 23-year-old second in the league for tackles (135) and leading St Kilda’s pressure acts by 103.

Michael Walters was best on ground for the Dockers when the two sides last met.

As far as small forwards go, Michael Walters has arguably been the most destructive this season.

‘Sonny’ was everywhere against Geelong, racking up 29 disposals (17 contested), eight clearances and a goal in the upset.

He was just as potent against the Saints in Round 3 with 27 disposals at 92% efficiency, eight clearances and two majors.

While Walters hasn’t been as volatile on the scoreboard in recent weeks (three goals from four games), the 28-year-old still tops Fremantle for goals (34) and score involvements (124).

His speed, craft, and midfield bursts will see Shane Savage as an ideal candidate.