The Trevor Barker Award may be the most prestigious accolade on St Kilda’s night of nights, but several other Saints will be applauded for their efforts throughout the season.

Tune into the LIVE STREAM of the 2019 Trevor Barker Award by downloading the official Saints App. Coverage will begin at 7.30pm, Wednesday 11 September, live from Crown Palladium.

When you mention the name Lenny Hayes, you immediately think of tough, courageous, selfless and team-first, and this is exactly what this award stands for. Each week, the playing group presents the game ball to a player who has stood tough for the team, culminating with this award being presented to a player who has upheld the values of the Saints Crest. 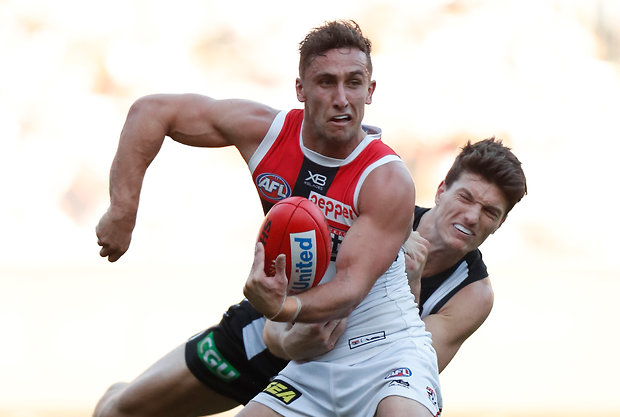 Luke Dunstan's grunt and strength was a constant throughout 2019.

Jack Steele
After notching up a league-high 164 tackles for the year, the tough-as-nails Jack Steele personified every trait that made Lenny Hayes so legendary.

Luke Dunstan
Midfield bull Luke Dunstan picked up the mantle of the No. 7 to lead the Saints for clearances and win the second-most contested possessions.

Tim Membrey
Never afraid to put his body on the line, Tim Membrey capitalised with the club’s most goals and marks inside 50 for the year.

Jack Lonie
One of the smallest men on the field but revered for his fearlessness, Jack Lonie’s grit around the fall of the ball ramped up the Saints’ forward pressure in 2019.

The Robert Harvey Best Clubman Award is awarded to a player who underpins the club's values both on and off the field. This player has displayed a desire to help out teammates and the greater community by his willingness to put the club first and do the right thing at all times.

Jarryn Geary's leadership was pivotal, even when he was stranded on the sidelines.

Shane Savage
Loyal, trustworthy and always putting the team before himself, Shane Savage upheld all the values which made Robert Harvey such a respected Saint.

Dan Hannebery
Incredibly driven after bouts of hamstring issues limited his game-time, Dan Hannebery was the ultimate professional in setting the standards to the younger playing group.

Jarryn Geary
Emergency compartment surgery and a broken leg couldn’t keep our skipper down, with his leadership off the field – and on the field during his five games for the year – vital to the Saints.

Dylan Roberton
Despite not playing a game for almost two seasons, Dylan Roberton still made his impact felt through his nurturing and coaching of the emerging backline brigade.

Sam Rowe
The definition of hard work (which ultimately led him to 100 career games), Sam Rowe’s role in the development of several young Saints left him a much-loved figure among the playing group.

St Kilda’s Best Emerging Player award is voted by the coaching department and awarded to a player who is in their first to fourth year at the football club. The award recognises a player for not only his commitment and desire to help the team succeed on the field, but also his professionalism and club-first approach off it.

Hunter Clark showed the St Kilda faithful just what he was capable of in the second half of the season.

Hunter Clark
The 19-year-old from Mount Martha exploded onto the scene in the second half of the season, his class and evasive skills off half-back putting the top-10 draft pick’s name up in lights.

Rowan Marshall
‘The Prospect’ delivered on his nickname, topping the club’s contested possessions, centre clearances and stoppage counts to become the highest-ranked player in the league midway through the season.

Josh Battle
A transformation from a key forward into a key defender paid massive dividends for Josh Battle, who finished second in the Saints’ intercept marks and fifth for effective kicks.

Nicholas Hind
Quick as lightning and electric with the footy, Nicholas Hind averaged a goal a game from his 11 outings in Season 2019.

Callum Wilkie
St Kilda’s leading interceptor, Callum Wilkie was the first Saint to play every game in his debut season since Steven Sziller in 1995.

Dare Sainter of the Year

The Dare Iced Coffee Sainter of the Year Award will also be presented for the first time in 2019, recognising the player who was deemed by the fans to be the best of the season.

Tune into the LIVE STREAM of the 2019 Trevor Barker Award by downloading the official Saints App. Coverage will begin at 7.30pm, Wednesday 11 September, live from Crown Palladium.